Once long ago, man and nature, were one. 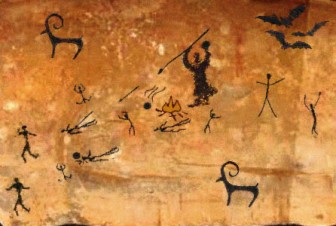 He spoke with the trees,
Saw colors in the breeze.
He learned many things, both seen and unseen,
From those in the trees, near the rocks, and streams.
Enchanted by man, she came closer to the flame,
They danced together, sang together; feasting in the rain.
But all of that stopped, when man found greed,
Gone now were the voices, near the rocks, and in the trees.
In vain she cried out, she warned him of his fate,
But man would not listen, because it was too late.

And nature grew tired, of trying to get through.
One world became fierce. One world cringed in fear,
Her world then retreated, and refused to go near.
War and disease, soon ravaged the land,
So nature took back, the gifts she gave man.
Outraged and angered, tales of monsters he told,
Of those in the trees, near the rocks, and waters cold.
But a tale of a monster is often hard to tell,
Is it defined by its actions, its looks, or its smell?
So here is your challenge, tell me if you can,
Who is the monster, and who is the man?